Ten-year-old pianist Elizabeth Kandelaki, a Year 6 pupil at St Vincent’s RC Primary School, has been named Emunah Young Musician of the Year after performing in front of a 350-strong audience at the Royal Academy of Music in Marylebone on Sunday 9 March. The national contest attracted over 70 entrants who took part in heat prior to the finals in which Elizabeth was one of 11 finalists competing for the award. Held in association with the Jewish Chronicle, the national competition is run by the charity Emunah which helps disadvantaged children and young people in Israel through its network of children’s homes, high schools, day care, therapy and counselling centres.

“This is the first time that I have won anything – it is probably one of the best experiences in my life. I am overwhelmed,” said Elizabeth Kandelaki, who takes music lessons at the London Russian School of Music (formerly known as Belsize Music Academy).

Perfectly poised, Elizabeth impressed the judges with a fine and sensitive performance of Grieg’s Notturno. She started playing piano and violin at the age of seven, with piano becoming her first instrument. She also studies music appreciation and composition. She will receive a cheque for £300 from competition sponsors Wienerworld, the indie music specialist, and perform at Emunah’s Guildhall dinner in December.

Malcolm Singer, Director of Music at the Yehudi Menuhin School and chairman of the judges, said:

“Elizabeth drew a beautiful tone from the piano and captivated the audience with her magical and wonderfully lyrical manner.” He noted that “the standard of competition was exceptionally high.” 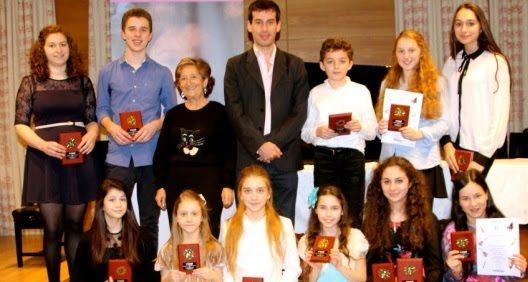 The North London Music Festival began in 1920, and it's purpose is to “Advance, promote and encourage generally, and by means of the Competitive Festival Movement in particular, the study and practise of the arts of Music, Speech, Drama & Dance in all their branches.”

isten to Shaunak's performance below (with Sergey Basukinsky playing the orchestra part):

Theo Nash won the Novice Pianist class.
Kseniya Kusnetsova received a "Distinction" mark in the Novice Pianist class.
Zach Brandman, Alessandro D'Orazio and Shaunak Desai won the class "Trio for One Piano".
Masha Vassylieva won the Junior Category. She also won the 20th Century Composer class and the Piano class for 9 year olds, and received a silver medal in an under-10 class and a Trophy for her performance in the 20th Century Composer class.
Sasha Antonova won a silver medal in her age group and received a "Distinction" mark for her performance in another class.
Raphael Brandman received a silver medal in the Piano class for 7 year olds