“Glorious is the Voice of Man, and sweet is the music of the harp.” Richard Llewellyn 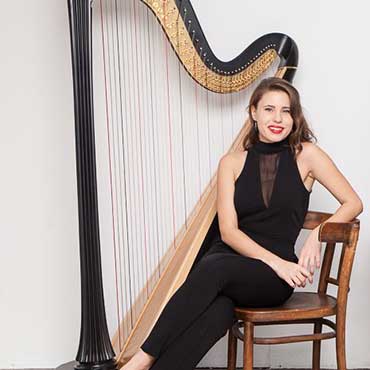 Valeria Kurbatova is a multi-award-winning London based harpist – specialising in solo harp performances, chamber music and orchestral harp. She regularly plays for the likes of London Philharmonic Orchestra and the London Contemporary Orchestra and is also a principal harpist in the London Electronic Orchestra.

Valeria has performed as a soloist and in ensemble groups in numerous concerts, in a vast range of concert halls including: Royal Festival Hall, Royal Albert Hall, Wigmore Hall, The Barbican, V&A Museum, The Forge, The Roundhouse, The National Gallery, The Houses of Parliament, Cadogan Hall, Kensington Palace and Westroad Hall.

As a soloist, Valeria has won prizes at a number of different International harp and music competitions such as: Scholarships from New Names Foundation, and Spivakov International Foundation, harp prize at the International Harp Competition in Moscow and Young Talent Award at the Moscow Music Festival. She obtained a full ABRSM scholarship to cover her tuition at the Royal College of Music, where she has studied with Ieuan Jones. Valeria’s other teachers include Jana Bouscova, Marisa Robles and Svetlana Paramonova.

During 2017-2018 she was selected by the London Philharmonic Orchestra to join their highly competitive Foyle Future Firsts development programme.

Passionate about teaching and outreach work Valeria has obtained an ABRSM Teaching diploma and has been giving harp lessons in London since 2011 as well as doing workshops in schools and playing recitals in hospitals. Valeria is a hub ambassador for harp at the London Philharmonic Orchestra and works with Royal Greenwich, Southwark and Lambeth Councils in London. Valeria is also a harp teacher at the University College School London and the Mountview Drama Academy.