"The violin is my mistress, but the guitar is my master." Niccolo Paganini 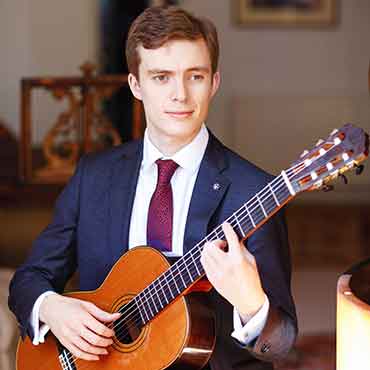 Emmanuel Sowicz (1992) is a British and Chilean guitarist who combines his passion for the guitar’s traditional repertoire with a keen interest in new music and the art of transcription. In 2014 he won First Prize at the II SMBA International Guitar Competition in Buenos Aires, and in 2017 he was awarded First Prize and the Audience Award at the XLIV Dr. Luis Sigall International Music Competition in Viña del Mar – Latin America’s most prestigious classical music competition. In 2018 he became a EuroStrings Artist after winning First Prize by a unanimous decision at the London International Guitar Competition, leading to a European tour across eight countries.

Emmanuel’s recent engagements include performances at Abbey Road Studios, St Martin-in-the-Fields and Kings Place in London, as well as a performance for Arvo Pärt and Sting at the recently inaugurated Arvo Pärt Centre in Estonia. In January 2018, he gave a televised concert for the 50th Semanas Musicales de Frutillar festival as soloist with the National Youth Symphony Orchestra of Chile under maestro Maximiano Valdés, for which he was described as “the next star of the guitar” (Radio Beethoven FM). A month later, he premiered Timothy Bowers’s Concerto for Guitar and Orchestra, commissioned by the Royal Academy of Music. He has been interviewed for the Lennox Berkeley Society’s annual journal and he often appears on El Mercurio newspaper and Radio Beethoven FM.

Emmanuel complements his solo career by working with some of the UK’s finest orchestras. In November 2018, he played as part of the Philharmonia Orchestra at Southbank Centre for the UK premiere of Franco Donatoni’s Refrains II and in May 2019 he appeared at Barbican Hall alongside the BBC Symphony Orchestra & BBC Symphony Chorus for the UK premiere of Osvaldo Golijov’s Oceana, a cantata inspired in the poetry of the Chilean Nobel Prize laureate Pablo Neruda. He has also been invited to perform at Garsington Opera for the world premiere of David Sawer’s opera The Skating Rink (2018) based on the book by Chilean author Roberto Bolaño, as well as Mozart’s Don Giovanni in 2019.

Born in London to British and Chilean parents, Emmanuel graduated from the University of Chile in 2014 under Ernesto Quezada. He later received a scholarship to study with Michael Lewin, Fabio Zanon, and David Russell at the Royal Academy of Music in London, where he completed his Master of Arts and Advanced Diploma with Distinction, the DipRAM award for an outstanding final recital, and the Dove Prize for his outstanding studentship. He also studied a Postgraduate course with Marco Tamayo at the Mozarteum University in Salzburg.

Emmanuel Sowicz is a Savarez Artist and performs on a 2001 Matthias Dammann guitar kindly loaned to him by David Russell.